30 species from around the world to discover

There are two types of raptors: diurnal (daytime) and nocturnal (nighttime).
Discover their differences and lifestyles in detail.

Raptors are birds. But they are different from other birds in three ways:

In hawks, the male is known as the tiercel and is smaller than the female (about a third less in weight).

Diurnal raptors are characterized by their short-hooked beak and powerful, clawed feet. They are mostly excellent hunters with piercing eyesight. Some feed on carrion, like vultures. They nest on trees or on rocks and cliffs. They do not have talons, only feet that cannot grip and carry away: they do not need to have such feet, as they do not kill prey.

Nocturnal raptors also have hooked beaks and talons, but they are best recognized by their broad head and large eyes surrounded by feathers forming two facial discs. Their very soft plumage makes their flight silent. These are solitary birds that hunt at dusk or at night, but some species are also active during the day (like the short-eared owl for example). They feed on small mammals such as rodents.

The oldest known birds of prey are vultures that lived during the Eocene epoch, 60 million years ago.

Birds of prey hunt in a wide variety of ways:

Those who use gliding are often those with wide wings and long tails such as vultures and eagles, and also buzzards and kites to a lesser extent. With their wings spread out, they use the lift offered by thermal updrafts by making spiral circles.

Those who use flapping flight often have long, pointed wings like hawks. This way of flying is extremely tiring and is used for short periods of time.

In pursuit, the bird of prey flies fast until it is only a few metres away from its prey. Then it stops flapping its wings, keeps going and brakes at the moment of capture.

If the bird hunts by lying in wait for its prey, it lands on a pole, an electricity line or hovers.

Finally, some use hunting flight: these include nocturnal raptors, goshawks and hawks, which have short, rounded broad wings that allow them to fly skilfully through vegetation.

Raptors are divided into two families based on what they eat: hunters and scavengers.

Hunting birds of prey feed on all possible sources of meat: kites feed on insects, some eagles eat snakes, sea eagles and osprey feed on fish, while marsh harriers eat frogs. However, most of them catch mammals (mainly rodents) or birds.

That variety of prey animals could partly explain the variety of raptor species. If given the opportunity, hunting raptors will readily feed on carrion, but scavengers never hunt. In fact, they cannot even grasp a mouse with their feet.

The other crucial sense for locating prey is hearing. Even though their asymmetrical ears give them excellent hearing, that sense is used very little by daytime raptors. On the other hand, it is essential for nocturnal raptors, so much so that they even have silent plumage to make the most of it.

It allows snowy owls to hear lemmings under the snow. While sight and hearing are highly developed, that is not true of smell. It is almost non-existent, except for three species (out of more than 550): the turkey vulture (Cathartes aura), the Andean condor and the king vulture (Sarcoramphus papa), all of which are new world vultures.

Birds of prey find everything they need, and more, in meat. Since they cannot digest bones, feathers, fur or teeth, they spit these out in the form of a small tight ball called a “pellet”. Moreover, meat is 80% water, so they do not need to drink unless the weather is really very hot. Some raptors never drink water in their entire lives.

While they do have access to water at the aviary, it is to enable them to bathe every day and keep their feathers in perfect condition for flight. In theory, a bird of prey can eat any prey smaller than itself; however, every species has its own food preferences.

Some raptors have evolved to adapt and specialise their diet: sea eagles, for instance, feed on fish, which are more plentiful than rodents. They lie in wait on a perch near the water and catch fish that swim up to the surface.

The Egyptian vulture is a rare example of adaptation: it is fond of eggs (mostly ostrich eggs), but has to first break them. It is clever enough to use a tool, a pebble in this case, which it holds in its beak and throws at the egg. Such use of a tool is unique behaviour in raptors, and very exceptional in the animal world: only about a dozen animal species are capable of doing so.

Birds of prey are very moderate feeders: they only eat a small amount of food in relation to their weight. There are of course exceptions, such as falcons, which are very active and thus spend more energy.

Like most birds, raptors breed in the springtime, so that the young are fully independent and entirely operational by the time winter comes along. They generally form pairs and are ready for breeding by the age of four years. They are said to mate for life.

Raptors may build nests or use scrapes. This may take the form of branches at the top of a tree or just a crack in a cliff, depending on the species. When the eggs are laid, the parents incubate them for an average of 30 days, up to 55 days for vultures, turning them over regularly: this is the incubation period.

48 hours before hatching, the chick pierces the air pocket and utters its first cry

It goes 12 hours without eating after hatching, as it has reserves

At the age of two months, it learns to fly

At three months, it is expected to start looking for a new territory of its own

By four years old, it finds a mate and may have its own young 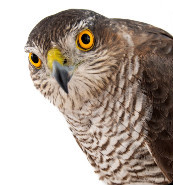